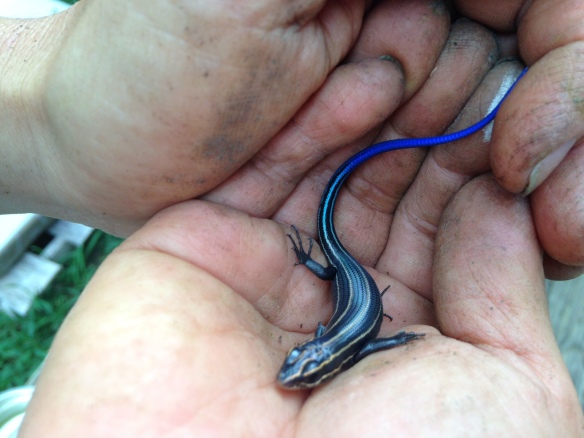 Please excuse the dirty hands, two hours mowing and two more digging will do that.

It’d make a cool tattoo if I were so inclined!

Found another friend in the garden.  I was turning my mulch pile and this awesome creature scurried out.  I was super excited and ran in to show my daughter to which she backed away without panicking too much and I convinced her to take a peek.

The brilliant colors really are amazing in person.  You know this a juvenile because it’s tail is so striking and the blue (sometimes purple) tail is so vibrant.  You know you’ve found an adult male by it’s orange or reddish head.  Females are a bit duller but will still have the distinctive stripes and color.

These guys are often found in grassy areas or around wood piles and decaying vegetation. (Makes sense me finding him in my mulch pile!)  They can also be found around rock piles (I have tons of that; literally.)

They like to eat insects; such as grasshoppers and crickets, spiders, earthworms, larvae, other lizards, and even mice!

These guys are diurnal which means they live on the ground.  (Fancy name; diurnal 😉  )

Since they lay their eggs from May to June; the babies will hatch between June to August, and finding this one near, I’ve decided to leave my mulch pile alone.  Mostly because I like a creature that eats spiders and mice.  Not that I’ve seen any mice, but spiders…they are everywhere.  I’m not afraid of spiders and will often take them out bare handed, however getting bit is another story.  When I get bit by one, it takes days of healing using a concoction I make.

FYI: Five-lined Skinks are NOT poisonous; though some say they taste bad so as to discourage being eaten!

Females lay 10-20 eggs…They are oviparous, which means, they lay eggs with little or no embryonic development inside the mother; like a bird; it’s eggs embryonic fluids and such are inside the egg.  The development of the animal doesn’t come from “stewing” inside the mom.

The females take care of the eggs.  If they need to warm up, she will lay out in the sun and then return to the eggs to warm them up!  If the air is dry she will cover the eggs with soil so they don’t dry out and if they are too dry she will urinate on them to replenish the moisture.

If the momma suspects a rotten egg; she will eat it for added nutrition.

They are not harmful to humans.

Hope you enjoyed learning about these colorful creatures.  I’m off to dig up potatoes!  Have an awesome day! 😀